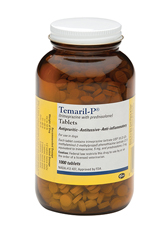 An antipruritic, antitussive and anti-inflammatory for dogs.

Temaril-P Tabets are an antipruritic, antitussive and anti-inflammatory for dogs. Each Temaril-P Tablet contains the equivalent to 5 mg trimeprazine and 2 mg prednisolone. Temaril-P is used for the relief of itching and the reduction of inflammation commonly associated with most skin disorders of dogs such as the eczema caused by internal disorders, otitis, and dermatitis (allergic, parasitic, pustular, and nonspecific). It often relieves pruritis which does not respond to other therapy. Temaril-P is also used for the treatment of kennel cough or tracheobronchitis, bronchitis including all allergic bronchitis and infections and coughs.